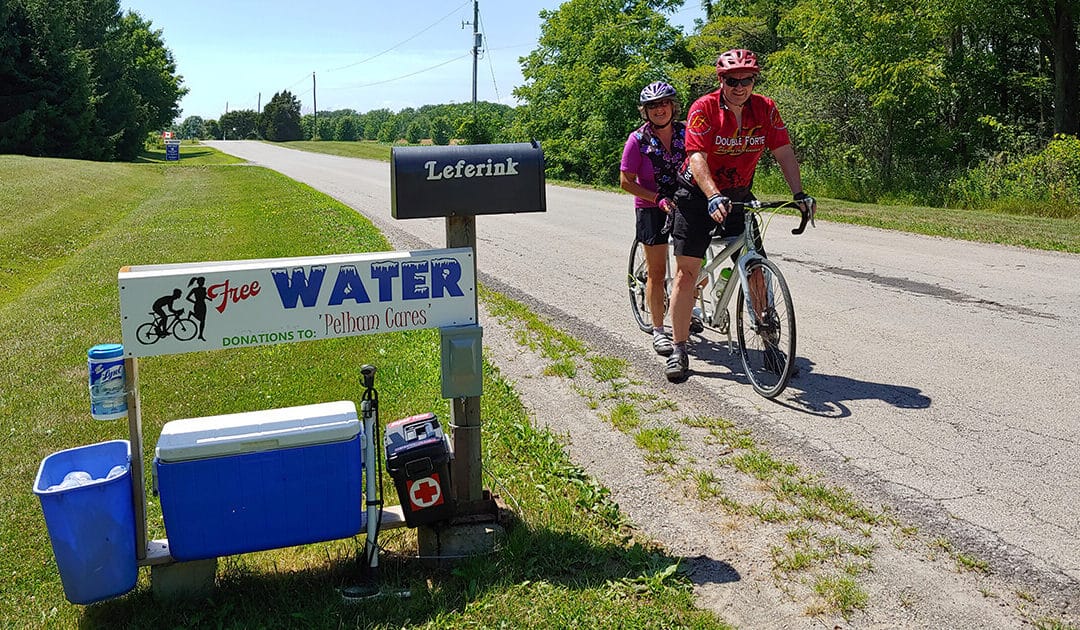 I was chatting with my friend Dave and said I’d been getting on the bike more. He whimsically suggested we go for a ride. Of course, I said “Yeah, we should”. That set the wheels in motion for a visit from Dave and his wife Vanessa.

Dave grew up in Fonthill but hasn’t done any road riding in Niagara for years, aside from a sojourn on the Niagara Parkway Trail with his co-workers. He described that experience as “bearable”, and the pathway itself as “filthy with unleashed toy dogs, children, and idiots thrashing around on roller skates”. Perhaps a little harsh, but not entirely inaccurate either. I was pretty sure I could figure out a route that wouldn’t involve multi-use recreational trails so I invited them down and they accepted.

This past Sunday was bright, clear, and hot. Mother Nature doesn’t care about records, but the day was a serious contender for the title of “Hottest Day of the Year”. Dave and Vanessa battled Niagara-bound traffic on the QEW for longer than seemed necessary or appropriate considering Niagara’s still in Stage 2 of the provincial Covid-19 lockdown, but they arrived around 1:00 with their tandem bicycle.

One thing you need to understand about tandem bicycles: they are the ultimate test of a couple’s relationship. An unnamed tandem rider once said “No matter what direction your relationship is headed, a tandem will get you there faster.” Judging by the quantity and quality of their playful jests and barbs, I think Dave and Vanessa are masters of their tandeming and their relationship. Note to couples who are thinking about tying the knot one day: find a bicycle rental company and rent a tandem several times. “The divorce bike” will show you just how well you’re able to work as a team.

We hit the road around 2:00 as the afternoon sun seemed to turn up the heat. A moderate westerly breeze didn’t cool us any but it helped us warm up our legs as we slowly pedaled out of Thorold going uphill and into the wind. Starting out along a freshly-paved Beaverdams road was a nice treat. People fished from the roadside of Lake Gibson and Dave reminisced about how there used to be great bass fishing on the lake when he was a teen. A reservoir for hydro-electric power generation at Decew Falls, Lake Gibson boasts an impressive (to me) variety of fish species: bluegill, crappie, perch, sunfish,bass (large and smallmouth), pike, pickerel (walleye), carp, and some say even a few brown trout. It’s a popular spot, but for us it was just one of the many fine sights Niagara has to offer.

Fresh asphalt gave way to the usual weathered gray roadway as we turned south onto Kottmeier Road. Our friend the westerly breeze was now an annoying crosswind but we enjoyed pedaling the quiet country road through fields of green soybeans, young corn, and horses. Dave and Vanessa’s tandem cycling adventures hadn’t brought them to Niagara before. They’d each cycled in various races (including Liberty Bicycle’s old Squeezer mountain bike race) but hadn’t cycled together in Dave’s old stomping grounds. As we rode, Dave shared some stories from his childhood, including how he grew up with the Metler and Hansler kids. I only know those names from the roads so was happy to learn some of the stories of the families in the area.

As we turned west onto Port Robinson Road and headed into Fonthill, Dave commented on how much things have changed since he was a kid. Subdivisions had replaced the agricultural lands he once knew and we lamented how small towns are all starting to look the same as big box stores move in. Turning north onto Pelham Street we started heading into town. I heard an astonished “NO WAY” from behind me. I stopped and as the tandem pulled up, Dave said how thrilled he was to see Beamer’s Hardware & TV in Fonthill. Apparently Dave has a pack of screws he inherited from his father that were purchased at Beamer’s over 40 years ago. At least some things have stayed the same.

We pushed north on Pelham Street and started heading downhill. This is where a tandem bicycle shines. Two cyclists working together on a bicycle that is usually heavier than two single bicycles have an advantage over a single rider when gravity is in their corner. Dave and Vanessa coasted speedily downhill while I pedaled strongly to try and keep up. Pelham Street ends where it meets Hollow Road, which is a gem of a road for cyclists. It’s a little hilly, a little curvy, a little shaded, and totally beautiful. It’s one of Niagara’s little cycling secrets. If you’re going to come to Niagara to cycle, try and work it into your ride. It’s not very long, but it’s awesome. We passed Niagara’s oldest one-room schoolhouse on our left as we turned right and tackled the short but serious uphill leading to Holland Road. 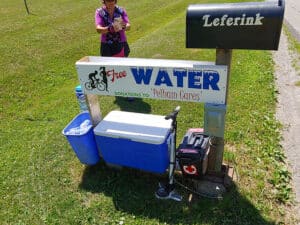 So good, it’s a cyclo-tourism destination!

Heading west, Holland Road turns into Roland Road for no known reason. Maybe it’s so Holland Road can keep its good name, because after a nice little downhill, Roland Road offers a lovely, curse-worthy climb up to Effingham Street, passing by Parking Lot B for Short Hills Provincial Park. You also pass what must be one of the nicest cyclist-loving families in Niagara: the Leferinks. These wonderful people have set up a cyclist’s respite station in front of their house, complete with free water bottles (in a cooler, on ice packs), a pump, tools, and first aid supplies, along with Lysol wipes and a recycling bin. There’s also a donation box and all proceeds go to Pelham Cares. We all stopped and enjoyed some cool water in the shade on the Leferink family’s front yard. As Dave later said, “They saved my ride.”

With Dave newly-refreshed we turned north onto Effingham Street, went straight at Wessel Drive and came to a freshly-paved Pelham Road. Alas, we couldn’t take the fresh pavement down the escarpment, so we turned left and then right, descending the escarpment on Ninth Street Louth. Again, Dave and Vanessa and their tandem had the advantage and I was hard pressed to keep them in view as we flew down the hill. As we hit the flats heading north we passed by Rockway Vineyards Golf Course. Ninth Street bisects the course and we were glad to not have to dodge golf carts. I suspect most golfers don’t cycle and most cyclists don’t golf. We rode by golfers who probably looked as bemused looking at us as we did looking at them. 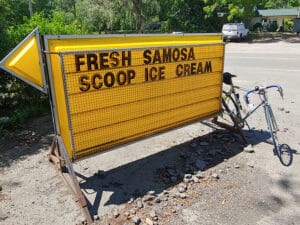 It sounds like a strange combination, but it was awesome!

Turning east onto Regional Road 81 (Old Highway #8) we enjoyed the descent and climb of the valley between Ninth and Seventh Street, then stopped at Regional Variety & Gas Bar. This is probably not a popular cycling destination but I think it should be. Where else in Niagara can you get fresh samosas and scoop ice cream? I’ve driven past that sign for years and my wife and I have always said we should stop there to check it out.

This is one reason I love cycling. If you’re driving somewhere you don’t tend to stop when you see something interesting. You’re going somewhere and that destination is more important than the journey. As a cyclist, the interesting places you pass on your journey are what make the trip more memorable. In our case, Dave said that it was mandatory for our trip to have an ice cream stop. Regional Variety & Gas Bar turned out to be the perfect choice. 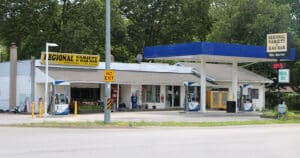 Our samosas were indeed fresh, still seeming to be warm out of the deep fryer. Each samosa was a reasonable size, with flaky pastry with big bubbles from the frying and a nice potato filling with just the right amount of spicy kick. For a small variety store they had a surprising number of ice cream flavours. I was enjoyed a generous serving of Orange Pineapple ice cream. No waffle cones – just the “standard” cone one can find anywhere but it really hit the spot. We enjoyed our snacks in the shade at the two picnic tables tucked away in a corner of the parking lot. I’ll be back, and next time my wife will be with me.

Watered and fed, we continued our trek eastward along Regional Road 81, turning south on Third Street Louth. We could see the escarpment off to our left and while we knew we had to climb it to get back to Thorold, I hadn’t shared a little secret with Dave and Vanessa. We rode on lovely flat terrain, turning left onto Eighth Street Louth, enjoying what would be our last few carefree moments for a while. 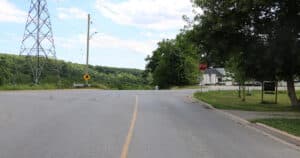 Usually when you look across an intersection, you see road. Not here.

There are approximately 25 different roads that climb the Niagara Escarpment. As climbs go, none of them are particularly long, but some of them are rather steep. What makes this climb more challenging is that it starts at the bottom a valley. That’s right: there’s a valley right at the base of the escarpment at the foot of First Street Louth. I am told Nikola Tesla was brought in to consult the consortium that built the Decew Falls generating station. The falls drop over 79 meters (260 feet, or 24 stories) and lucky us, we were about to climb that height over the space of the next 1.44 kilometres. 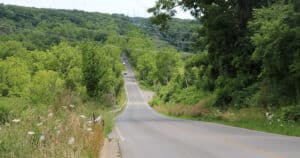 No matter which way you approach this road, you have to go down before you up again.

It’s true that there’s a nice lead-up to the climb. When you facing south on First Street Louth and gaze across the street at Pelham Road, you don’t see any street. First Street Louth plunges into the valley at the bottom of the escarpment. Cyclists can enjoy a few moments of insane speed and let the momentum carry them up a gradual slope. The climbing action really begins at the sharp left turn that signals the start of Decew Road and continues for less than a kilometre, but it’s a tough climb on a bike and doubly so on a tandem. We ground it out in our granny gears then spun the lactic acid out of our legs as we cruised back to our starting point in Confederation Heights.

We baked, we rode, we conquered. Despite the heat, it was a beautiful Niagara cycling experience. Vanessa reminded me often how scenic our ride was, and how relatively car-free the roads were. As someone who’s lived in Niagara for only half my life, I remember what it’s like to cycle in places that are less bicycle-friendly. Niagara truly deserves its reputation as a cycling mecca. This fun little ride showcased some of the best that Niagara has to offer cyclists. I’m sure I’ll be able to tempt Dave and Vanessa back down to Niagara. We may even try to change Dave’s opinion of cycling in Niagara-on-the-Lake 😉