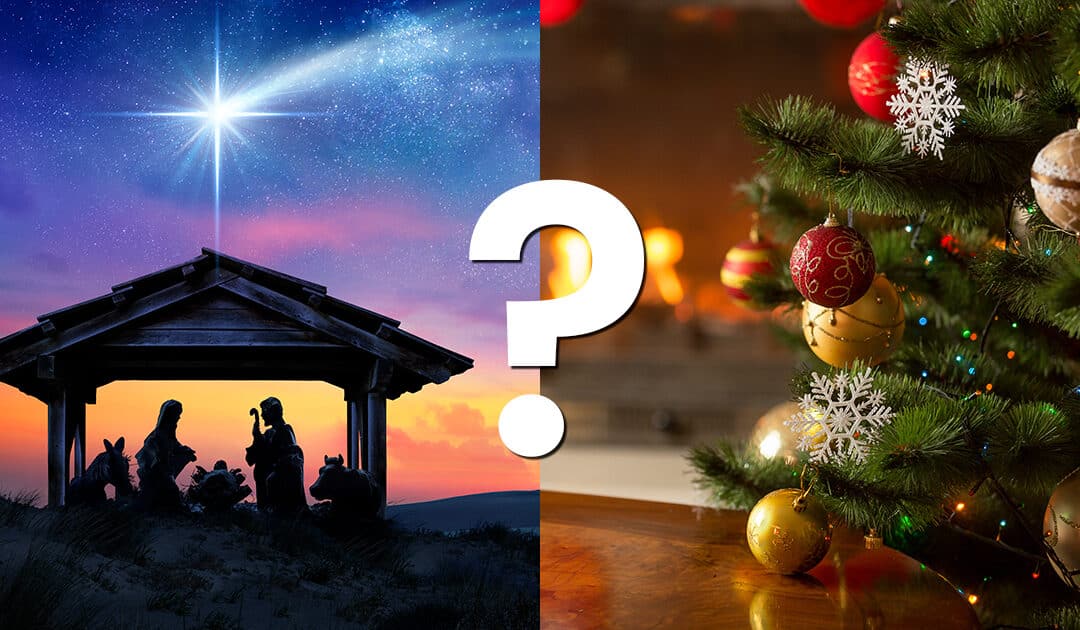 As a child, I never questioned where Christmas came from. Santa Claus delivered presents sometime in the wee hours between Christmas eve and Christmas day. That was the important bit, plus of course the massive family get-togethers with far more food than anyone could ever hope to eat. It wasn’t until my innocence was shattered and I found out that Santa Claus was really my parents that I started questioning what the whole Christmas thing was all about.

Not huge questions, of course, because that would have upset the apple cart, but I began thinking about where the traditions came from that were so distinctly non-Middle Eastern. I mean, Jesus would never have seen a Christmas tree, so how the heck did that start? These weren’t the types of questions I could get answered at church. Not because our church had a rigidly dogmatic worldview (our family went to the United Church – ’nuff said), but because nobody actually knew the answers to the questions.

Today we have the world’s information at our fingertips. A friend of mine posted a graphic (to the right) that answered all of my childhood questions about Christmas. Of course, it made me wonder if the information was accurate. I mean, I’ve heard about some of these things over the years, but where did these “facts” come from?

I took a lovely trip around the internet to try and find the sources for the information presented here. This is what I found.

That was a fun read. Yule is a historic festival of ancient, pre-Christian Germanic peoples. Lots of food, sacrifices, and toasts to Odin. This article didn’t specifically mention that Yule is the name of a Scandinavian fertility god, so that piece of information may not be factually correct.

As a form of decoration, wreaths of various sorts have been used by many cultures. Ancient Greek, Roman, and southern European cultures use wreaths for decor as well as for adornments that would represent a person’s status.

As for Wicca, I was surprised to see that it is a relatively modern movement that started in the 1950’s. The beliefs it espouses go back much further, but historically there doesn’t seem to be an organized (or even a disorganized) Wiccan religion one can trace.

Fun note: the song “Deck the Halls” is a Welsh tune that originates in the sixteenth century. Nowhere in the original Welsh lyrics is there any mention of decorating halls with holly. The earliest published Welsh lyrics translate as follows:

“Oh! how soft my fair one’s bosom,
Oh! how sweet the grove in blossom,
Oh! how blessed are the blisses,
Words of love, and mutual kisses,”

Well, no mention of druids here, nor in any other article from a source one could consider reputable or moderately scholarly. Is this an example of druid-ism, where anything associated with the druid religion or customs is being written out of the historical fact? Who knows 😉

Again, a fun read 🙂 Are they specific to Saturnalia? Hard to say. This article says that homes were decorated with evergreen wreaths for this Roman mid-winter festival. Did you know the ancient Egyptians, Chinese, and Hebrews used evergreen trees, wreaths, and garlands as symbols of eternal life? Yeah. Me neither. Modern Christmas trees seem to have originated in the renaissance in Germany. Obviously there are many roots of the Christmas tree story (pun intended 😉 ).

If you’re going for something historical, it seems ancient Romans may have indulged in gift giving during Saturnalia. The Roman empire ran from 753 BC to 476 AD. If this is the earliest mid-winter festival that involves gift giving, then it certainly pre-dates any notion that gift giving is tied to the presents the three wise men presented to baby Jesus.

There are also plenty of references to Odin as an early gift-bringer figure in Europe, and Odin’s 8-legged horse has been touted as a source of inspiration for the eight reindeer of Santa Claus.

For those who are interested, here’s a nice write-up provided by The European Pantry in Welland regarding the history of St. Nicholas.

It’s interesting to note that early Christians did not celebrate Jesus’ birthday. It’s not also specifically mentioned in the Bible what the date was. However, there are a few other occurrences on December 25th, one being the birthdate of an Indo-European god named Mithra, a god of light. The Christian church in Rome began celebrating Christmas on December 25th in the year 336 AD while the cult of Mithras practiced between the 1st and 4th century AD. Could it have been Mithras’ birthday that inspired emperor Constantine to choose December 25th as the date to celebrate Christmas? I guess we’ll have to go back and ask him 🙂

From everything I read, all that is clear is that our modern Christmas traditions have many, many different origins. The one consistent feature of all these origin stories is the focus on being in groups, with family and friends, and celebrating life, in all of its weirdness and glory. I hope you have a fabulous Christmas / Saturnalia / Happy Mistra Day, or mid-Winter Festival. You be you, I’ll be me. Let’s all get along 🙂