Could This Be the Least Efficient Fundraiser? 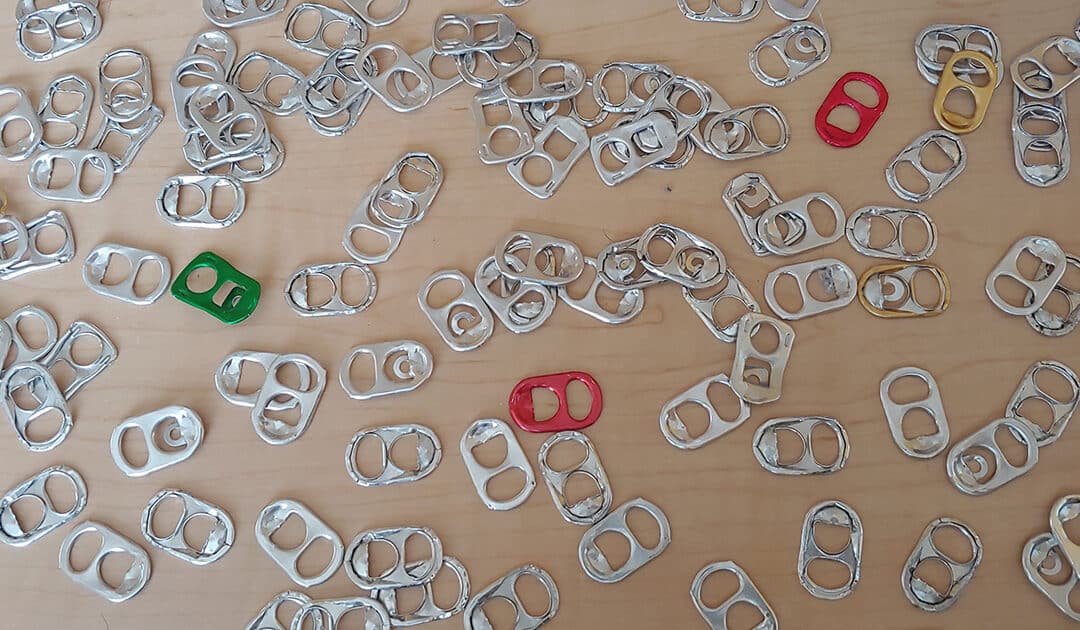 To say I “stumbled” across these the other day would be a lie. They’ve been sitting at the bottom of my sock drawer for years. While doing a purge of my worn out and holey socks, I decided to clear them out. Now they sit on my desk while I ponder what to do with them.

There was a time when seemingly everyone I knew collected pop tabs because “some charity” was going to benefit from them. Back in the day, I was young and never questioned which charity it was. It didn’t matter, because these “useless” bits of metal were going to a good cause, right?

This was in the era before blue boxes entered our lives. My parents recycled glass and newspapers, storing them up and taking everything to a recycling depot. I used to love that trip, because you could chuck glass jars and bottles into the bin and watch them shatter. Peanut butter jars (remember when PB used to come in 2 litre glass jars?) used to be the best for that, although mom often used them as storage containers because of their size.

Purging these pop can tabs from my sock drawer was a good thing, but now they’re on my desk and need to be purged from there as well. My wife (and probably every clutter consultant worldwide) is encouraging me to do the same. What to do? Well, now that we have this thing called “the internet”, it’s easy to find which charity collects these tiny donations.

Effective Fundraiser? Sure. Efficient? Not by a long shot.

When it comes to efficiency, I am not an expert. If there were a school of efficiency, I probably would have been in the lower percentile of students. However, I think I would shine if I had to compare my overall efficiency to pop can tabs as a fundraiser.

In what passes for “research” these days, I sent an email inquiry to Glendale Metal Company asking what the current scrap metal rates are for aluminum cans. As of today, December 7, 2020, the going rate is . . . $0.25 / lb. When you do the math, it’s clear that pop can tabs are not an efficient way to fundraise.

In fundraising dollars, you will raise $0.25 from all your efforts to collect those 2722 tabs. I could probably clean out my couch and find more than a quarter, in a fraction of the time. There were 130 tabs in my sock drawer, representing $0.01 of potential value. I can tell you now, these tabs are headed to my recycling bin, because I will expend much more than $0.01 of effort and cost to deliver them anywhere.

A modern aluminum drink can weighs 13 grams. (Source) Based on these numbers, it takes 35 cans to make a pound of aluminum. If you’re going to collect aluminum as a fundraiser, you’re much better off collecting the whole can than just the tab. Going by the numbers, I think it’s possible that aluminum can tab collection may be the absolutely least efficient fundraiser going. However, that doesn’t seem to stop people from doing it.

Who’s Collecting Pop Can Tabs for Charity? And, Why?

A quick Google search reveals that the Ontario March of Dimes, Easter Seals Ontario, and Ronald McDonald House use the money raised from drink can tabs for charitable causes. From a bit of reading, I’ve seen a few benefits given for this form of fundraising.

An article on a major pop can tab fundraiser in the St. Catharines Standard in 2019 said that the major contributors to these types of fundraisers are school kids and their teachers. The article also noted because of the millions of tabs collected, Easter Seals has been able to purchase eight wheelchairs, other equipment for people with disabilities, and has paid for a surgery for a child’s cleft palate. This is wonderful, and the people behind this should be commended for their efforts. These are great achievements and have been beneficial.

All I wonder is whether all those efforts could have done more. I appreciate that pulling pop can tabs is easy and anyone can do it, and that kids love it, but at the same time, shouldn’t we be aspiring to do more? A simple bake sale that raises $20 in profit takes less time and effort than collecting the 217,760 pop tabs it would take to raise the same amount of money. If you were to sit down and pull pop tabs, it would probably take you around 3 seconds per can. If you could maintain that pace, it would take you 181.4 hours to pull that many tabs.

How people choose to use their time for charitable causes is up to them. Charities need all the help they can get these days, so something is better than nothing, I suppose. At the end of the day, some good is done by the cumulative action of even the smallest efforts. This method of fundraising isn’t my cup of tea, but if it is for you, that’s great.

I just found a loonie on my desk, with the same value as 10,888 pop can tabs. I’ll take a few seconds to drop that in a collection bin for something, somewhere. I’ll be me, you be you. Let’s do our best to make the world a better place. Even if we’re not particularly efficient 🙂